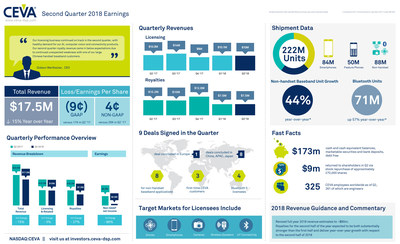 Gideon Wertheizer, CEO of CEVA, stated: "Our licensing business continued on track in the second quarter, with healthy demand for our AI, computer vision and connectivity products. Our second quarter royalty revenue came in below expectations due to continued unexpected weakness with one of our large Chinese handset baseband customers. We now expect the weakness with this Chinese customer to continue for the rest of the year and have reduced our annual royalty expectations accordingly. With that said, we are encouraged by a new production ramp and share gain of a flagship smartphone and the continued expansion of our non-handset baseband products. As a result, we expect royalties for the second half of the year to be both substantially stronger than the first half and deliver year-over-year growth with respect to the second half of 2018."

During the quarter, CEVA completed nine license agreements. Four of the agreements were for CEVA DSP and AI platforms, including a third NeuPro AI license agreement, and five were for CEVA connectivity IPs. Eight of the agreements were for non-handset baseband applications and three were with first-time customers of CEVA. Customers' target markets for the licenses include advanced cameras, drones, smart speakers, smartphones, wireless headphones and IoT devices. Geographically, five of the deals signed were in China, one was in Europe and three were in the APAC region, including Japan.

Yaniv Arieli, Chief Financial Officer of CEVA, stated: "Despite lower-than-expected royalty revenue for the second quarter, we were pleased to see continued progress in our non-handset baseband customers, who shipped a new record level of 88 million CEVA-powered devices. On buyback, we purchased approximately 270,000 shares of our common stock in the second quarter for an aggregate consideration of approximately $9 million. In addition, our Board of Directors approved the expansion of this plan during the quarter, and as of June 30th, we have a total of 700,000 shares of common stock available for repurchase. Moreover, CEVA's cash and cash equivalent balances, marketable securities and bank deposits were approximately $173 million at the end of the quarter."

Full Year 2018 Revenue Guidance and Commentary
As a result of the lower royalty revenue for the first half of 2018, the expectation of continued weakness with the Chinese handset baseband customer for the remainder of 2018, and the lack of visibility and uncertainty for the timing of resumption of royalties with the well-publicized ban of a Chinese base station customer, the company is lowering 2018 annual royalty guidance to a level representing a 10% decrease from 2017 royalty revenue. While it is encouraging that the base station customer has resumed operations, it's assumed, that it will take them a few months to rebuild their supply chain and to get back to full production and shipments. In light of the above and to be prudent, the company now projects total annual revenue to be approximately $80 million.

CEVA Conference Call
On August 07, 2018 CEVA management will conduct a conference call at 8:30 a.m. Eastern Time to discuss the operating performance for the quarter.

The conference call will also be available live via webcast at the following link:  https://www.webcaster4.com/Webcast/Page/984/26513. Please go to the web site at least fifteen minutes prior to the call to register, download and install any necessary audio software.

About CEVA, Inc.
CEVA is the leading licensor of signal processing platforms and artificial intelligence processors for a smarter, connected world. We partner with semiconductor companies and OEMs worldwide to create power-efficient, intelligent and connected devices for a range of end markets, including mobile, consumer, automotive, industrial and IoT. Our ultra-low-power IPs for vision, audio, communications and connectivity include comprehensive DSP-based platforms for LTE/LTE-A/5G baseband processing in handsets, infrastructure and cellular IoT enabled devices, advanced imaging and computer vision for any camera-enabled device, audio/voice/speech and ultra-low power always-on/sensing applications for multiple IoT markets. For artificial intelligence, we offer a family of AI processors capable of handling the complete gamut of neural network workloads, on-device. For connectivity, we offer the industry's most widely adopted IPs for Bluetooth (low energy and dual mode) and Wi-Fi (802.11 a/b/g/n/ac/ax up to 4x4). Visit us at www.ceva-dsp.com and follow us on Twitter, YouTube, Facebook and LinkedIn.

Forward Looking Statement
This press release contains forward-looking statements that involve risks and uncertainties, as well as assumptions that if they materialize or prove incorrect, could cause the results of CEVA to differ materially from those expressed or implied by such forward-looking statements and assumptions.  Forward-looking statements include Mr. Wertheizer's statements about the second half of the year being substantially stronger in royalty revenue due to a new flagship smartphone and continued expansion of CEVA's non-handset baseband products, the revised annual revenue and annual royalty revenue guidance and the rationale for such revised guidance in the section entitled, "Full Year 2018 Revenue Guidance and Commentary," as well as any potential prospects of share buybacks. The risks, uncertainties and assumptions that could cause differing CEVA results  include: the ability of the CEVA DSP cores and other technologies to continue to be strong growth drivers for us; our success in penetrating new markets, including in non-baseband markets, and maintaining our market position in existing markets; our ability to diversify the company's royalty streams, the ability of products incorporating our technologies to achieve market acceptance, the speed and extent of the expansion of the 4G, 5G and LTE networks, the maturation of the IoT market, the effect of intense industry competition and consolidation, global chip market trends, the possibility that markets for CEVA's technologies may not develop as expected or that products incorporating our technologies do not achieve market acceptance; our ability to timely and successfully develop and introduce new technologies; and general market conditions and other risks relating to our business, including, but not limited to, those that are described from time to time in our SEC filings.  CEVA assumes no obligation to update any forward-looking statements or information, which speak as of their respective dates.